Probably like many people across America, I’ve been feeling anxious this week. Seeing unrepentant and unexamined entitlement on display; seeing trauma trotted out cavalierly, has been hard for me.

But yesterday, I drove.

I left my home in central New York and headed south to the environs of Washington, DC for some church business and it was a welcome break. I wasn’t pressed for time. I had space. I had time to linger if I wanted. I had a pretty good Stromboli in downtown Scranton and some pretty solid BBQ in Frederick. But in between I stopped at two shrines.

One was a shrine to our national aspirations, Gettysburg.

Gettysburg is surely known to almost every American. The place Abraham Lincoln famously called a “a great battle-field of that war.” As well as a “final resting place for those who here gave their lives that that nation might live.” It is a place that may never escape its association with death and battle, nor likely its association with solemnity and American hopefulness.

I was particularly struck by the extensive preservation (or more likely, recreation) of the landscape of those three fateful days in July 1863 (though the close proximity of some fast-food places a few hundred yards from the site of Lincoln’s address was a little jarring). Nonetheless, it is a sobering place to contemplate what lies beyond the limits of civil discourse and a shared belief in the integrity of governing institutions. An ominous reminder in these days.

The other was a more sedate, and lonely visit; the National Shrine Grotto of ​Our Lady of Lourdes near Emmitsburg, MD.

The Shrine Grotto is, I imagine, far less known than the battlefield just a few miles north. I confess I had never heard of it until the roadside sign appeared in front of me and I thought; “hmm, that sounds interesting.”

It, like the sprawling National Battlefield, is a place where the dead are ever near. It too is a cemetery. Likely, those who lie in their graves at the shrine died more mundane and less symbolically meaningful deaths than at Gettysburg. No presidents uttered memorable words over their graves. Their lives remain un-sanctified to the national cause. Their deaths, like most of ours, were the centers of small personal tragedies, not national ones.

The site is none the lesser for it. It is a beautiful spot with sweeping views of the valley below, nestled into the woods. And instead of a spirit of the nation looking down on the fields and graves below, an impressive statue of Mary, the mother of Jesus, presides over this quiet spot.

The two have made me wonder about the nature of pilgrimage, the sanctifying of place, and our search for meaning amid the chaos of human life.

For all its grandness and the loftiness of the rhetoric uttered there, Gettysburg is a testament to the ephemeral. Like Judah and Israel, the human thing we call the nation will pass away.

In truth, the shrine with its grave markers, buildings, statuary, and even its trees will pass away too someday. But the thing it points too – Christ’s promise of abundant and eternal life in Him – that will never disappear.

When we claim Christ as Lord, as our only Lord, we are saying that our deepest and most fervent allegiance lies with that promise. Through faith we claim that promise for ourselves. 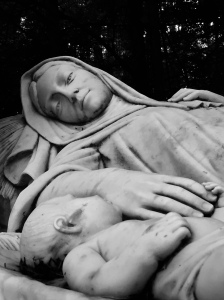 I was especially taken by a statue of the Holy Family meant to depict a moment shortly after Jesus emerged from the womb. Mary lies next to her infant and stares at him with pure love. I imagine that’s why Mary has proved so endurably appealing. That fierce young woman’s love and devotion is an icon of God’s love for all of us. In the faith of a young woman in a difficult place, we can see a mirror and an exemplar what an allegiance like that can achieve.

This site uses Akismet to reduce spam. Learn how your comment data is processed.