This also appeared at the Episcopal Cafe.  It was written for an Episcopal church audience, but I believe it applies to most church bodies and denominations.

I used to be a priest in West Virginia.  I’m still a priest, but recently moved away from West Virginia.  One of my roles there was working on the diocesan Evangelism committee.  I don’t know that we were able to accomplish a lot, but the diocese did see some growth for a couple of those years and my parish saw steady gains in membership for much of my time there.  But with a little separation; I’ve been reflecting on the church there and wondering in what ways it is like and not like other places.

The Episcopal diocese of West Virginia was established 140 years ago, about ten years after the state established its separate identity during the Civil War.  And the diocese has 66 congregations, 3/4 of which were founded before 1900 (50 years ago there were 95 parishes).  Like most places, West Virginia has changed significantly since 1900.  The 20th century saw a boom in coal and railroads as energy resources buried almost everywhere under the state was dug up and shipped off.  Coal mining and railroads were once huge, sprawling industries and extremely labor intensive and so people flooded into West Virginia and towns sprouted up and fortunes were made.

And though a great deal of coal is still mined here, it is not anything like as labor intensive as it once was, and neither is rail-roading.  So, it turns out that all those little coal camp hamlets and the bigger towns that arose to serve their needs from doctors to movie theaters aren’t quite the thriving places they once were.  Exhibit A is the city of Welch in McDowell county at the south end of the state.  In 1950, 100,000 people called McDowell county home and Welch was a bustling place.  Today 22,000 people live there, and Welch is a much quieter place.

All of which is a prelude to asking, if we were to start from scratch establishing the Episcopal Church in West Virginia, would we build something that looks the church we have now?  My guess is, probably not. The image below is taken from an amazing project called the Census Dotmap which aims to show the location of every single person in America.  As you can see, West Virginia has only a few clusters of people. 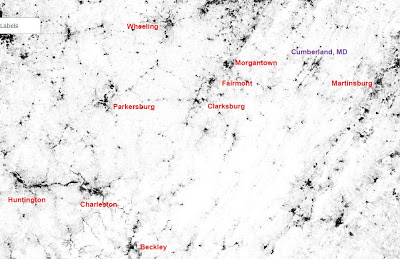 To locate our churches, we would need to know about how many people are needed to support an old-fashioned Episcopal parish (probably at least 100 households) and how much of the population can we attract to an Episcopal Church (historically, 1-2%). This would suggest to me that you need at least 10,000 people and probably more like 20,000 to support the standard model.  West Virginia has 13 “metro-areas” with more than 20,000 people.  If we built a church for every 20,000 people in those areas, we would build 40 or so parishes.  If we were smart though, we’d shoot for a couple of really big congregations in the largest metro areas, which would leave us probably more like 25-30 parishes.  Remember, there are 66 now.

I think the other thing we might do is to develop those parishes with a much greater sense of responsibility to the whole diocese, so that some large portion of their revenue would be directed towards support of ministry centers in the many small towns where we didn’t build a parish.  I have long thought that the congregational bent in American Christianity to work against greater cooperation between parishes.  Imagine a church where whole regions, comprising many points of connection, was engaged in mutual ministry!

I think that to some extent, our desire to recreate the English vision of a parish and a “gentleman” in every village of the land has meant that we only ever have one goal for our ministry expansion efforts – a full, self-supporting parish.  Perhaps we could be more creative than that and be ok with letting go of that vision where the population just won’t support it.

But even in the smallest places there are people who are drawn to the progressive Christian tradition at peace with human knowledge championed by the Episcopal church.  In some ways, what the Episcopal Church has to offer would be an important beacon of hope in those places.  Surely there’s a way to create centers of mission, worship, and formation in those places and not expect them to be fully self-supporting?

I also think we won’t ever reinvigorate our church without being willing to let go of the old vision and be ready to go where the people are now and not where they used to be.  To expect them to conform to the expectations of our Anglo-Saxon establishment forebears is unworthy of a church which claims a universal mission to all people.

I’ve been thinking a lot about the future shape of the church.  I’ve heard lots of people tell me what the future of church looks like; everyone seems to have a preferred model (house churches for everyone!).  But it strikes me that there isn’t one ideal model out there, and that whatever the future looks like, I think we’ll be seeing a much greater mixed economy of “church” than we’ve seen in a long while.  There are places where the traditional parish model still works (and well) and is very effective.   But with something like ¾ of our congregations seeing fewer than 50 people on a Sunday it clearly isn’t working everywhere.

Looking specifically at the situation in West Virginia, one of the most obvious things about the diocese is its lack of urban areas and given the open marketplace on religious affiliation, many locales are just not able to support the traditional parish model and yet I don’t think we should abandon faithful Episcopalians and potential future Episcopalians there.

[As an aside, it strikes me that there are plenty of places where rather than 14 branch offices of Christianity, they would be much better served by just one community church.  The ever-present desire to go our own ways and dismiss Christians who see things different from ourselves as somehow lesser is a cancer on the body of Christ.  We should be pushing for many more “joint-ventures” with our full communion partners]

But isolated, self-supporting worshiping communities have not always been the norm.  It may be true that such a model has been the preferred way, but are there any examples of a relatively thriving Christian Church in the absence of cities?  Well yes, there is – ancient Ireland.  The Christian Church managed to establish itself and spin-off some pretty amazing folks (Ss Brigid and Columba for example) who remain as heroic examples of faithfulness and who were instrumental in the spread of Christianity elsewhere in Europe.  And what I recall is that the locus of activity for the Irish church was not the parish or the diocese, but monastic communities.

Now I don’t necessarily think that the future of the Episcopal Church in rural America is monasteries, but what about intentional communities of some sort?  I’m imagining a core of individuals and families committed to worshiping together, committed to a revenue generating activity, and committed to a focused ministry.  Perhaps, if such communities could be fostered and grown, they could operate as Christian centers whose influence could spread across a much wider region, supporting smaller worship communities and perhaps even developing new focused intentional communities on the same model as themselves.

I’m not suggesting this as THE answer, but something like this has worked in the past and it thrived for hundreds of years.  I don’t see it as an impossibility, so if anyone has some usable property (or maybe a little cash) to offer in Southern West Virginia, let me know.  Maybe we could start our own Christian micro-distillery!

What ideas have you seen or imagined?

image: St Andrews Episcopal Church in Mullens, WV taken about 1927.  The church closed in 2016, with only 3 remaining members

This site uses Akismet to reduce spam. Learn how your comment data is processed.